The short story is the only genre that can be considered uniquely American. The genre began as sketches, or tales, as in the classic tale “Rip Van Winkle.” The genre remained undefined until Edgar Allan Poe’s well-known 1842 review of Nathaniel Hawthorne’s Twice-Told Tales. Since Poe’s review, in which he distinguished short fiction from other genres, the American short story has evolved both in form and in content. Like other genres, the short story has evolved through various movements and traditions such as realism, modernism, and postmodernism; however, it has remained unique because of publishing opportunities that differ from longer works such as the novel. The short story genre shares elements of fiction with the novel, traditionally consisting of characteristics such as plot, character, setting, point of view, theme, and writing style. Although the short story shares elements of literature and writing devices with other literary genres, avenues for publication differ greatly. Unlike a novel, a short story is not published as a single entity. It is usually presented with works by other authors in a journal or magazine or in a collection of previously published stories by one author. The rise in popular magazines during the 1920s gave rise to the short story, as the magazines provided a publication outlet.

In Britannica, search for 'Short story', then scroll right down to 'Emergence of the modern short story - The 19th century'. The 4th paragraph in this section deals with the development of the American short story. 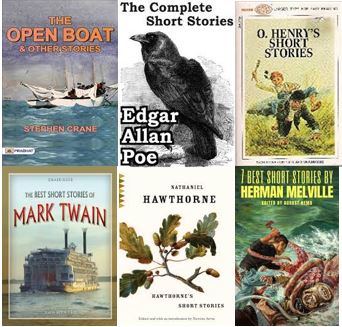 The Columbia Companion to the 20th C. American Short Story
An outstanding e-text for the study of American short stories.
Esteemed critic Blanche Gelfant's brilliant companion gathers together lucid essays on major writers and themes by some of the best literary critics in the United States. Part 1 is comprised of articles on stories that share a particular theme, such as "Working Class Stories". The heart of the book, however, lies in Part 2, which contains more than one hundred pieces on individual writers and their work, including Fitzgerald, Hemingway, Richard Ford, Raymond Carver, Eudora Welty, Andre Debus, Zora Neal Hurston, Anne Beattie, Bharati Mukherjee, J. D. Salinger, and Jamaica Kincaid, as well as engaging pieces on the promising new writers to come on the scene.