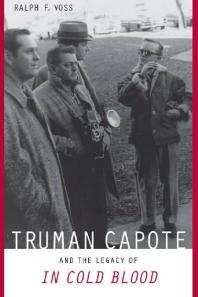 Ebook: Truman Capote and the Legacy of 'In Cold Blood'

The author examines Capote and In Cold Blood from many perspectives, not only as the crowning achievement of Capote’s career, but also as a story in itself, focusing on Capote’s artfully composed text, his extravagant claims for it as reportage, and its larger status in American popular culture.

Voss argues that Capote’s publication of In Cold Blood in 1966 forever transcended his reputation as a first-rate stylist but second-rate writer of  “Southern gothic” fiction; that In Cold Blood actually is a gothic novel, a sophisticated culmination of Capote’s artistic development and interest in lurid regionalism, but one that nonetheless eclipsed him both personally and artistically. He also explores Capote’s famous claim that he created a genre called the “non-fiction novel,” and its status as a foundational work of “true crime” writing as practiced by authors ranging from Tom Wolfe and Norman Mailer to James Ellroy, Joe McGinniss, and John Berendt.

Voss also examines Capote’s artful manipulation of the story’s facts and circumstances: his masking of crucial homoerotic elements to enhance its marketability; his need for the killers to remain alive long enough to get the story, and then his need for them to die so that he could complete it; and Capote’s style, his shaping of the narrative, and his selection of details–why it served him to include this and not that, and the effects of such choices―all despite confident declarations that “every word is true.”

Though it’s been nearly 50 years since the Clutter murders and far more gruesome crimes have been documented, In Cold Blood continues to resonate deeply in popular culture. Beyond questions of artistic selection and claims of truth, beyond questions about capital punishment and Capote’s own post-publication dissolution, In Cold Blood’s ongoing relevance stems, argues Voss, from its unmatched role as a touchstone for enduring issues of truth, exploitation, victimization, and the power of narrative.

"The last to see them alive" - Panopticism, the supervisory gaze, and catharsis in Capote's 'In Cold Blood' (Studies in the Novel)

Photography, Unconscious Optics, and Observation in Capote’s 'In Cold Blood'  (Arizona Quarterly - A Journal of American Literature, Culture, and Theory)