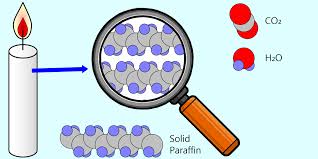 A chemical change happens when one chemical substance is transformed into one or more different substances, such as when iron becomes rust. Chemical changes occur through the process of chemical reactions, and the resulting substances have different properties because their atoms and molecules are arranged differently. 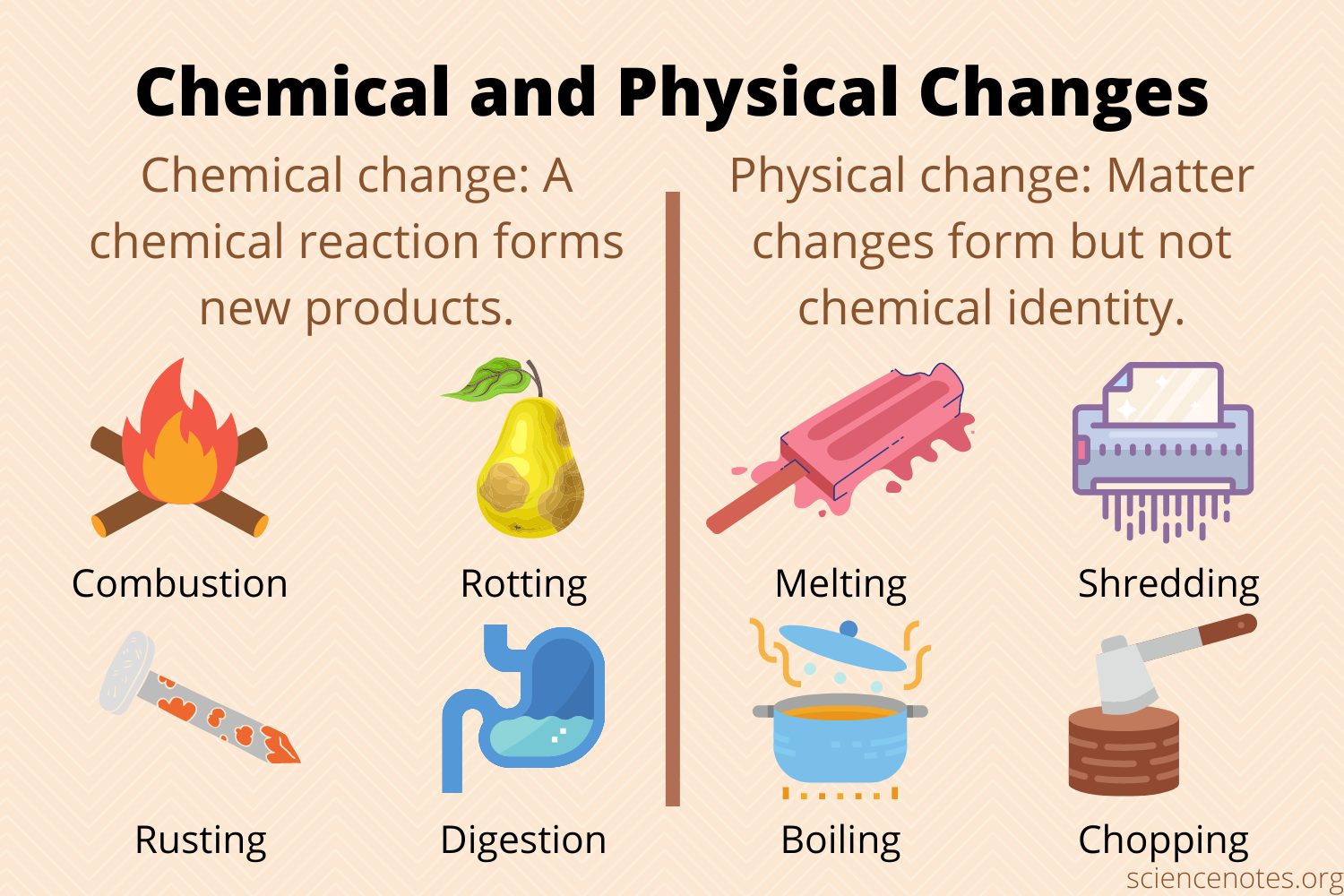 A chemical change involves a chemical reaction to produce a new product. It is a change at the molecular level of matter. Chemical bonds between atoms break and then form to connect different atoms.

In a chemical change, new product forms as atoms rearrange themselves. Chemical bonds are broken and reform to make new molecules. Examples of chemical changes include:

Examples of physical changes include:

HOW TO TELL CHEMICAL AND PHYSICAL CHANGES APART 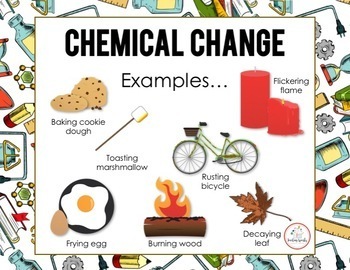 How to Tell Chemical and Physical Changes Apart

The key to distinguishing between chemical and physical changes is determining whether there is a new substance that wasn’t there before. If you see signs of a chemical reaction, it’s probably a chemical change. Signs of a reaction include:

If none of these signs are present, it’s a good bet a physical change occurred. 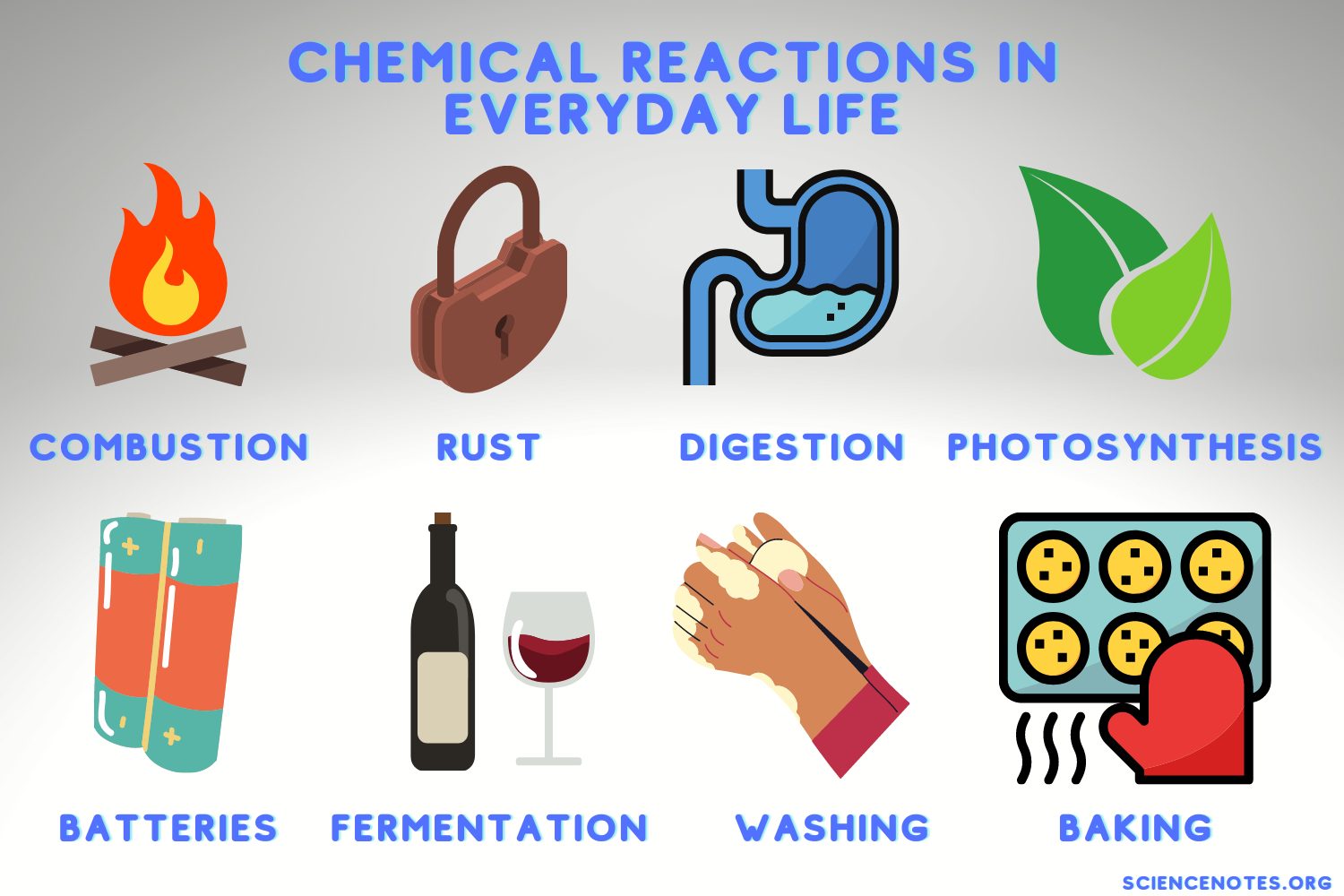 Chemical changes happen all around you, even in your own home. Explore some fun examples in cooking, nature, and your home.

Examples of Chemical Changes in Cooking

When you mix the flour and sugar to make a cake, you might not think it's a chemical reaction at play but it is. Baking a cake is a classic example where a new substance is created from mixing flour, sugar, vanilla, cocoa, and heat. Here are a few other cooking examples.

Do you like caramelized onions? Either way, it’s a great example of a chemical change. In caramelization, the sugar is broken down to create a specific aroma and taste.

Maillard browning is a strange name, but it's how you get that delectable brown crust on your bread and barbecued meat. Maillard browning, named for the chemist Louis-Camille Maillard, is a series of chemical reactions starting with amino acids and sugar.

Cooking isn’t the only place you see chemical changes. From the way that your body digests food to a match burning when you strike it, chemical reactions can be found everywhere. Dive into a few different examples in nature and your home.

Those beautiful colours of fall aren’t happening by chance. They are thanks to chemical changes in the leaves. Typically, leaves are green due to chlorophyll used for photosynthesis. However, before trees take their winter nap, chlorophyll in the leaves breaks down. As the chlorophyll breaks down, the carotene and anthocyanins naturally in leaves all summer long take centre stage creating those beautiful red and yellow colours.

One of the key characteristics a chemical change has taken place is odour, which is why people might smell foods to see if they went bad. For example, milk goes bad because of fermentation. This is where the lactose is transformed into lactic acid by bacteria surviving pasteurization.

If you mix an acid, such as vinegar, with a base, like baking soda, you’ll get a chemical reaction. In this case, it starts to bubble. This is a great way to create a homemade volcano.

You never want things to rust. However, no matter where you live, it’s inevitable. Rust is the chemical change taking place when iron is exposed to metal. Unless your car is made of plastic or in a bubble, it will find a way to rust. 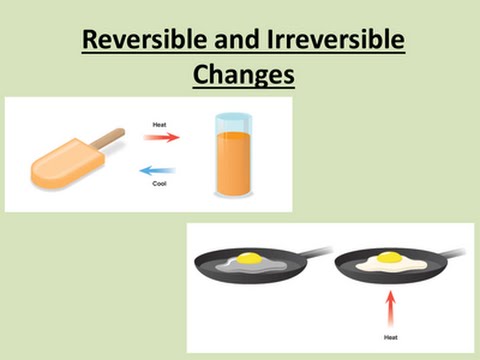 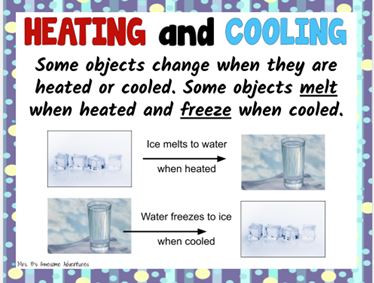 At the start of the 1800s, scientists thought reactions only went in one direction, which seems reasonable. After all, for a lot of processes, you can’t get things to react in the opposite direction. Imagine trying to uncombust a combustion reaction, like when methane burns in oxygen to form carbon dioxide and water. We’d have to force carbon dioxide and water to react to form methane and oxygen again. Impossible! But there was a French chemist named Claude Louis Berthollet that was studying a reaction where sodium carbonate reacts with calcium chloride to form calcium carbonate and sodium chloride.

He took a trip to a salt lake where he made an interesting observation. There was sodium carbonate forming at the edge of the lake. He eventually realized that the large amount of salt in the salt lake or sodium chloride was reacting with the calcium carbonate that’s found in the shells of marine organisms. In other words, the reaction was going in the reverse direction of what he was studying in the lab. As it turns out, there’s many reactions that don’t just go in the forward direction where the reactants combine to form the products. There’s many reactions that can go in the reverse direction as well, where the products can combine to form the reactants.